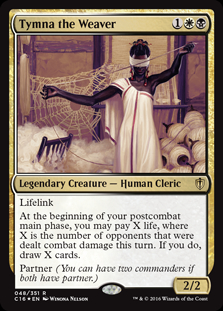 At the beginning of your postcombat main phase, you may pay X life, where X is the number of opponents that were dealt combat damage this turn. If you do, draw X cards.

Partner (You can have two commanders if both have partner.)

You must pay exactly X life or none. You can’t pay less life to draw fewer cards.

If a player was dealt combat damage and subsequently lost the game, Tymna’s triggered ability counts that player to determine the value of X.

Both commanders start in the command zone, and the remaining 98 cards of your deck are shuffled to become your library.

To have two commanders, both must have the partner ability as the game begins. Losing the ability during the game doesn’t cause either to cease to be your commander.

Once the game begins, your two commanders are tracked separately. If you cast one, you won’t have to pay an additional {2} the first time you cast the other. A player loses the game after having been dealt 21 damage from one of them, not from both of them combined. Command Beacon’s effect puts one into your hand from the command zone, not both.

An effect that checks whether you control your commander is satisfied if you control one or both of your two commanders. 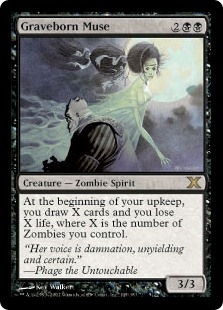 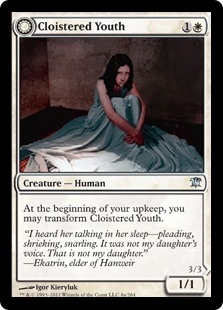