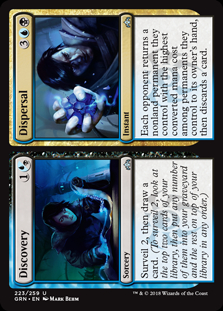 Surveil 2, then draw a card. (To surveil 2, look at the top two cards of your library, then put any number of them into your graveyard and the rest on top of your library in any order.)

If an opponent controls only lands as Dispersal resolves, that player won’t return any permanent to their hand. They’ll still discard a card.

If a permanent has {X} in its mana cost, X is considered to be 0.