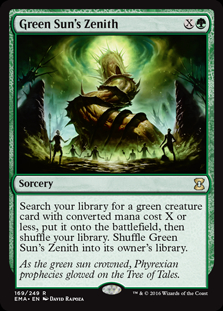 Search your library for a green creature card with converted mana cost X or less, put it onto the battlefield, then shuffle your library. Shuffle Green Sun's Zenith into its owner's library.

In most cases, if you own Green Sun’s Zenith and cast it, you’ll shuffle your library twice. In practice, shuffling once is sufficient, but effects that care about you shuffling your library (like Psychogenic Probe, for example) will see that you’ve shuffled twice.

If this spell doesn’t resolve, none of its effects occur. In particular, it will go to the graveyard rather than to its owner’s library.