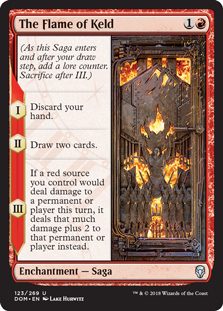 (As this Saga enters and after your draw step, add a lore counter. Sacrifice after III.)

I — Discard your hand.

If damage dealt by a source you control is being divided or assigned among multiple permanents an opponent controls or among an opponent and one or more permanents they control simultaneously, divide the original amount before adding 2. For example, if you attack with a 5/5 red creature with trample and your opponent blocks with a 2/2 creature, you can assign 2 damage to the blocker and 3 damage to the defending player. These amounts are then modified to 4 and 5, respectively.

Each symbol on the left of a Saga’s text box represents a chapter ability. A chapter ability is a triggered ability that triggers when a lore counter that is put on the Saga causes the number of lore counters on the Saga to become equal to or greater than the ability’s chapter number. Chapter abilities are put onto the stack and may be responded to.

Once a chapter ability has triggered, the ability on the stack won’t be affected if the Saga gains or loses counters, or if it leaves the battlefield.

If multiple chapter abilities trigger at the same time, their controller puts them on the stack in any order. If any of them require targets, those targets are chosen as you put the abilities on the stack, before any of those abilities resolve.

Once the number of lore counters on a Saga is greater than or equal to the greatest number among its chapter abilities—in the Dominaria set, this is always three—the Saga’s controller sacrifices it as soon as its chapter ability has left the stack, most likely by resolving or being countered. This state-based action doesn’t use the stack. 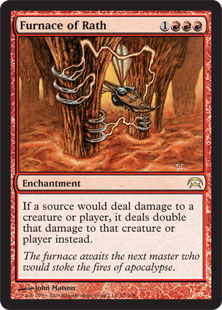 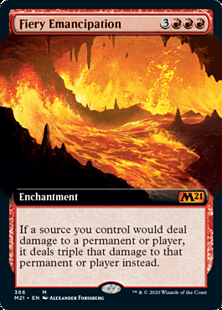 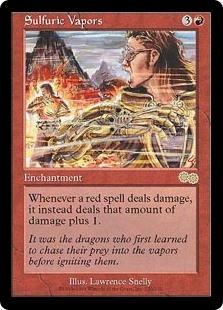