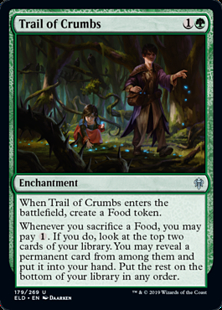 When Trail of Crumbs enters the battlefield, create a Food token. (It's an artifact with "{2}, {T}, Sacrifice this artifact: You gain 3 life.")

Whenever you sacrifice a Food, you may pay {1}. If you do, look at the top two cards of your library. You may reveal a permanent card from among them and put it into your hand. Put the rest on the bottom of your library in any order.

While resolving the second triggered ability, you can’t pay {1} multiple times to look at more cards.

A permanent card is an artifact, creature, enchantment, land, or planeswalker card.