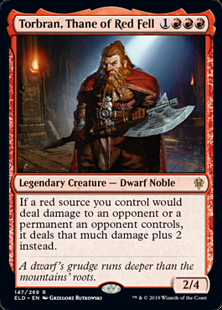 If a red source you control would deal damage to an opponent or a permanent an opponent controls, it deals that much damage plus 2 instead.

If another effect modifies how much damage your red source would deal, including preventing some of it, the player being dealt damage or the controller of the permanent being dealt damage chooses an order in which to apply those effects. If all of the damage is prevented, Torbran’s effect no longer applies.

If damage dealt by a source you control is being divided or assigned among multiple permanents an opponent controls or among an opponent and one or more permanents they control, divide the original amount before adding 2. For example, if you attack with a 5/5 red creature with trample and your opponent blocks with a 2/2 creature, you can assign 2 damage to the blocker and 3 damage to the defending player. These amounts are then modified to 4 and 5, respectively.