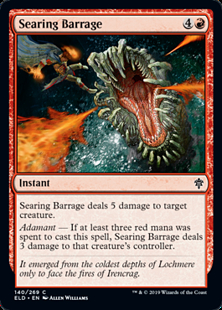 Adamant — If at least three red mana was spent to cast this spell, Searing Barrage deals 3 damage to that creature's controller.

Searing Barrage’s adamant ability causes it to deal additional damage. It doesn’t replace the damage dealt to the target creature.

If the target creature is an illegal target by the time Searing Barrage tries to resolve, the spell won’t resolve. No player will be dealt damage, even if you spent three red mana.