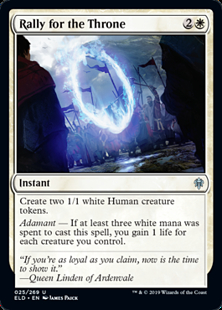 Adamant — If at least three white mana was spent to cast this spell, you gain 1 life for each creature you control.

You create Humans and gain life all while Rally for the Throne is resolving. Nothing can happen between the two, and no player may choose to take actions.