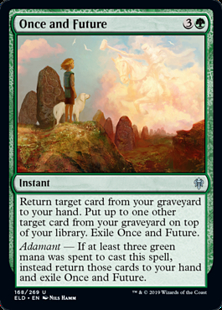 Adamant — If at least three green mana was spent to cast this spell, instead return those cards to your hand and exile Once and Future.

You choose which card will be returned to your hand and which will be put on top of your library as you choose those cards as targets, not as Once and Future resolves.