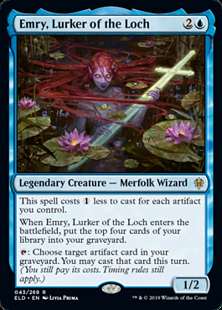 This spell costs {1} less to cast for each artifact you control.

When Emry, Lurker of the Loch enters the battlefield, put the top four cards of your library into your graveyard.

{T}: Choose target artifact card in your graveyard. You may cast that card this turn. (You still pay its costs. Timing rules still apply.)

To determine the total cost of a spell, start with the mana cost or alternative cost you’re paying, add any cost increases, then apply any cost reductions (such as that of Emry). The converted mana cost of the spell remains unchanged, no matter what the total cost to cast it was.

The cost reduction ability reduces only the generic mana in Emry’s cost. The colored mana must still be paid.

Once you announce that you’re casting a spell, no player may take actions until the spell has been paid for. Notably, opponents can’t try to change by how much Emry’s cost is reduced.

If Emry’s last ability targets an artifact land card, you can’t play it. Effects that allow you to “cast” a card don’t allow you to play a land card.

You must follow the normal timing permissions and restrictions for the target artifact card. Unless it has flash, you’ll most likely only be able to cast it during your main phase while the stack is empty.

You’ll still pay all costs for a spell cast this way, including additional costs. You may also pay alternative costs if any are available.

Casting the target card causes it to leave your graveyard and become a new object. You can’t cast it again if it returns to your graveyard this turn.