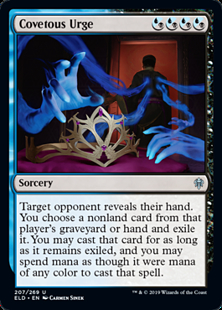 Target opponent reveals their hand. You choose a nonland card from that player's graveyard or hand and exile it. You may cast that card for as long as it remains exiled, and you may spend mana as though it were mana of any color to cast that spell.

If you cast an Adventure with Covetous Urge, it’s you, not the card’s owner, who may cast the creature later.

Covetous Urge’s effect doesn’t change when you can cast the exiled card. For example, if you exile a sorcery card, you can cast it only during your main phase when the stack is empty.

Casting an exiled card causes it to leave exile. You can’t cast it multiple times.

In a multiplayer game, if a player leaves the game, all cards that player owns leave as well. If you leave the game, the spell or permanent you control from Covetous Urge’s effect is exiled.