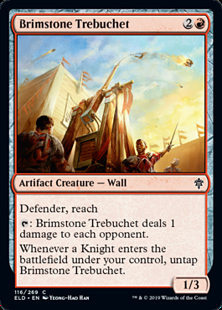 Whenever a Knight enters the battlefield under your control, untap Brimstone Trebuchet.

If more than one Knight enters the battlefield under your control at once, Brimstone Trebuchet’s last ability triggers for each of them. Players may take actions, such as activating its activated ability, in between each of those triggered abilities resolving.