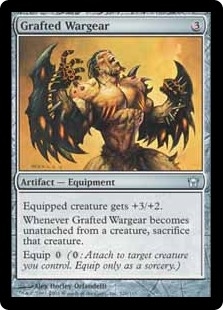 Whenever Grafted Wargear becomes unattached from a permanent, sacrifice that permanent.

Equip {0} ({0}: Attach to target creature you control. Equip only as a sorcery.)

You may activate this card’s equip ability targeting the creature that it is currently attached to, even if it’s the only creature you control. Since the equip ability costs zero, you can do this as many times as you like during your main phases, though it generally won’t do anything.

If your Grafted Wargear somehow ends up on an opponent’s creature and it then becomes unattached from that creature, you won’t be able to sacrifice that creature because you don’t control it.