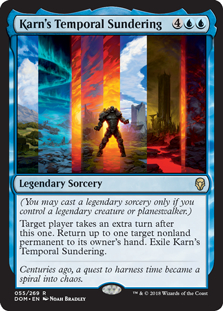 (You may cast a legendary sorcery only if you control a legendary creature or planeswalker.)

Target player takes an extra turn after this one. Return up to one target nonland permanent to its owner's hand. Exile Karn's Temporal Sundering.