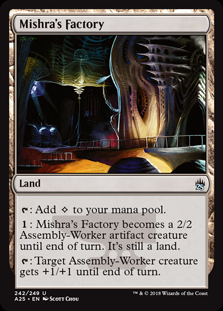 {1}: Mishra's Factory becomes a 2/2 Assembly-Worker artifact creature until end of turn. It's still a land.

{T}: Target Assembly-Worker creature gets +1/+1 until end of turn.

Once turned into a creature, Mishra’s Factory’s last ability can target itself. If it’s already blocking, this won’t remove it from combat.

If you turn Mishra’s Factory into a creature but haven’t controlled it continuously since your most recent turn began, you won’t be able to activate its first or last ability.

A noncreature permanent that turns into a creature can attack, and its {T} abilities can be activated, only if its controller has continuously controlled that permanent since the beginning of their most recent turn. It doesn’t matter how long the permanent has been a creature.

If another player takes control of the Factory while it is animated, that player keeps control until the control effect ends. They do not lose control just because the card stops being an Assembly-Worker. Note that Auras which steal cards will go to the graveyard if the permanent they enchant is no longer valid.