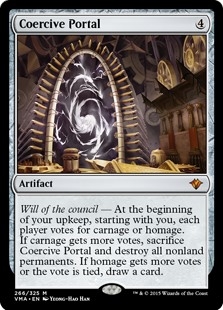 Will of the council — At the beginning of your upkeep, starting with you, each player votes for carnage or homage. If carnage gets more votes, sacrifice Coercive Portal and destroy all nonland permanents. If homage gets more votes or the vote is tied, draw a card.

Because the votes are cast in turn order, each player will know the votes of players who voted beforehand.

You must vote for one of the available options. You can’t abstain.

Players can’t do anything after they finishing voting but before the spell or ability that included the vote finishes resolving.

The phrase “the vote is tied” refers only to when there is more than one choice that received the most votes. For example, if a 5-player vote from among three different choices ends 3 votes to 1 vote to 1 vote, the vote isn’t tied.