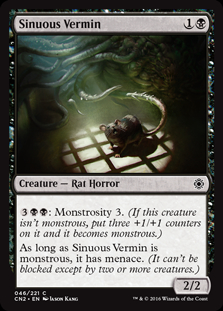 As long as Sinuous Vermin is monstrous, it has menace. (It can't be blocked except by two or more creatures.)

Once Sinuous Vermin has been legally blocked by one creature, activating the monstrosity ability to give it menace won’t change or undo that block.