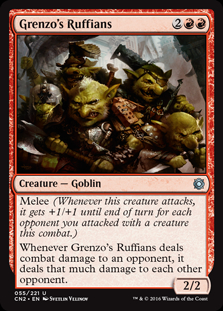 Melee (Whenever this creature attacks, it gets +1/+1 until end of turn for each opponent you attacked with a creature this combat.)

Whenever Grenzo's Ruffians deals combat damage to an opponent, it deals that much damage to each other opponent.

Melee will trigger if the creature with melee attacks a planeswalker. However, the effect counts only opponents (and not planeswalkers) that you attacked with a creature when determining the bonus.