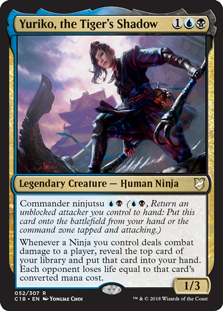 Commander ninjutsu {U}{B} ({U}{B}, Return an unblocked attacker you control to hand: Put this card onto the battlefield from your hand or the command zone tapped and attacking.)

Whenever a Ninja you control deals combat damage to a player, reveal the top card of your library and put that card into your hand. Each opponent loses life equal to that card's converted mana cost.

Commander ninjutsu is a variant of ninjutsu that can be activated from the command zone as well as from your hand. Just as with regular ninjutsu, the Ninja enters attacking the player or planeswalker that the returned creature was attacking.

Although the ninjutsu ability has the creature enter the battlefield attacking, it was never declared as an attacking creature (for the purposes of abilities that trigger whenever a creature attacks, for example).

If a card in your library has {X} in its mana cost, X is considered to be 0.