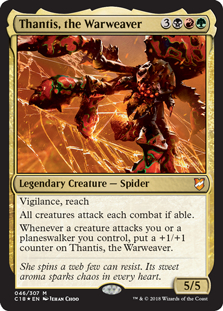 All creatures attack each combat if able.

Whenever a creature attacks you or a planeswalker you control, put a +1/+1 counter on Thantis, the Warweaver.

If a creature can’t attack for any reason (such as being tapped or having come under that player’s control that turn), then it doesn’t attack. If there’s a cost associated with having it attack, the player isn’t forced to pay that cost, so it doesn’t have to attack in that case either.

Each creature’s controller still chooses which player or planeswalker the creature attacks.

You can’t attack yourself or your own planeswalkers to give Thantis +1/+1 counters, but Thantis appreciates the way you think.