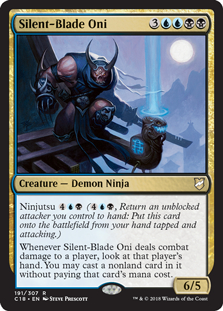 Ninjutsu {4}{U}{B} ({4}{U}{B}, Return an unblocked attacker you control to hand: Put this card onto the battlefield from your hand tapped and attacking.)

Whenever Silent-Blade Oni deals combat damage to a player, look at that player's hand. You may cast a nonland card in it without paying that card's mana cost.

The nonland card you cast via the triggered ability is cast as part of the resolution of that ability. Timing restrictions based on the card’s type are ignored. Other restrictions, such as “Cast [this card] only during an opponent’s turn,” are not.