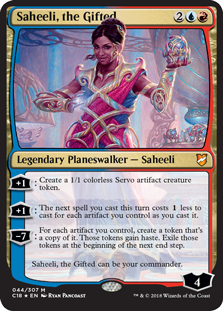 [+1]: The next spell you cast this turn costs {1} less to cast for each artifact you control as you cast it.

[−7]: For each artifact you control, create a token that's a copy of it. Those tokens gain haste. Exile those tokens at the beginning of the next end step.

Saheeli, the Gifted can be your commander.

To determine the total cost of a spell, start with the mana cost or alternative cost you’re paying, add any cost increases, then apply any cost reductions (such as that of Saheeli’s second ability). The converted mana cost of the spell remains unchanged, no matter what the total cost to cast it was.

The total cost to cast a spell is locked in before you pay that cost. For example, if you control three artifacts, including one you can sacrifice to add {C} to your mana pool, Saheeli’s second ability will reduce the cost of a spell you cast by {3}. Then you can sacrifice the artifact when you activate mana abilities just before paying the cost, and it remains reduced by {3}.

Saheeli’s second ability reduces only generic mana in the cost of the next spell you cast.

While resolving Saheeli’s third ability, each token copies exactly what was printed on the original artifact and nothing else (unless that artifact is copying something else or is a token; see below). It doesn’t copy whether that artifact is tapped or untapped, whether it has any counters on it or Auras attached to it, or any non-copy effects that have changed its types, color, or so on.

If a copied artifact has {X} in its mana cost, X is considered to be 0.

If a copied artifact is a token, the token that’s created copies the original characteristics of that token as stated by the effect that created the token. 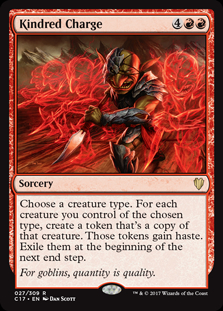 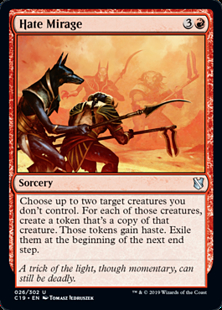 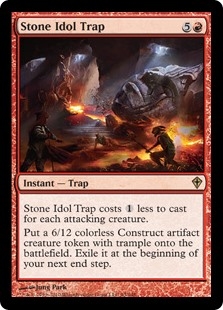