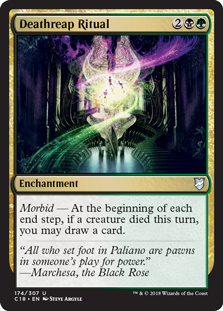 Morbid — At the beginning of each end step, if a creature died this turn, you may draw a card.

Deathreap Ritual’s ability has an intervening “if” clause, so a creature must have died before the end step begins in order for the ability to trigger. Notably, this means that the trigger won’t be on the stack for you to respond to by destroying a creature.

You draw one card when the ability resolves, not one card per creature that died during the turn.