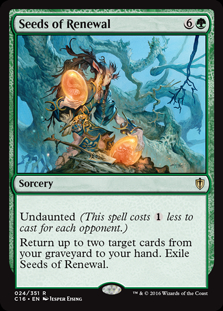 Undaunted (This spell costs {1} less to cast for each opponent.)

Return up to two target cards from your graveyard to your hand. Exile Seeds of Renewal.

If one target becomes illegal before Seeds of Renewal resolves, you’ll still return the legal target from your graveyard to your hand.

Causing an opponent to lose the game after you’ve announced that you’re casting a spell with undaunted and determined its total cost won’t cause you to have to pay more mana.