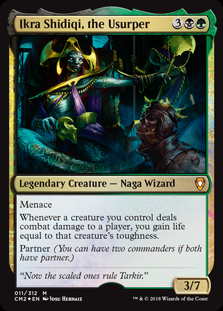 Whenever a creature you control deals combat damage to a player, you gain life equal to that creature's toughness.

Partner (You can have two commanders if both have partner.)

The amount of life you gain is determined as Ikra Shidiqi’s triggered ability resolves. If that creature is no longer on the battlefield, use its toughness as it last existed on the battlefield to determine how much life to gain.

Both commanders start in the command zone, and the remaining 98 cards of your deck are shuffled to become your library.

To have two commanders, both must have the partner ability as the game begins. Losing the ability during the game doesn’t cause either to cease to be your commander.

Once the game begins, your two commanders are tracked separately. If you cast one, you won’t have to pay an additional {2} the first time you cast the other. A player loses the game after having been dealt 21 damage from one of them, not from both of them combined. Command Beacon’s effect puts one into your hand from the command zone, not both.

An effect that checks whether you control your commander is satisfied if you control one or both of your two commanders. 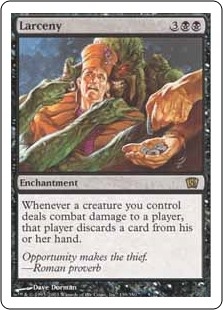 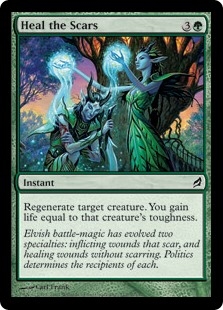