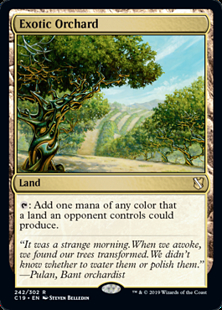 The colors of mana are white, blue, black, red, and green. Exotic Orchard can’t be tapped for colorless mana, even if a land an opponent controls could produce colorless mana.

When determining what colors of mana your opponents’ lands could produce, Exotic Orchard takes into account any applicable replacement effects that would apply to those lands’ mana abilities (such as Contamination’s effect, for example). If there are more than one, consider them in any possible order.

Exotic Orchard doesn’t care about any restrictions or riders your opponents’ lands (such as Ancient Ziggurat or Hall of the Bandit Lord) put on the mana they produce. It just cares about colors of mana.