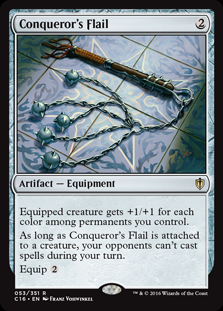 Equipped creature gets +1/+1 for each color among permanents you control.

As long as Conqueror's Flail is attached to a creature, your opponents can't cast spells during your turn.

If you move Conqueror’s Flail from one creature to another, there’s no time in between that it’s not attached to a creature. Assuming it’s your turn, your opponents won’t be able to cast spells.