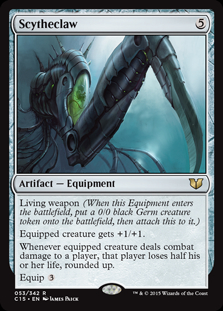 Living weapon (When this Equipment enters the battlefield, create a 0/0 black Germ creature token, then attach this to it.)

Whenever equipped creature deals combat damage to a player, that player loses half their life, rounded up.

Like other Equipment, each Equipment with living weapon has an equip cost. You can pay this cost to attach an Equipment to another creature you control. Once the Germ token is no longer equipped, it will be put into your graveyard and subsequently cease to exist, unless another effect raises its toughness above 0.