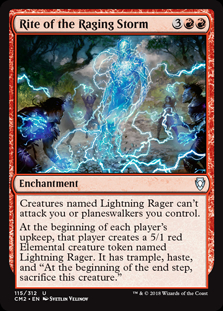 If Rite of the Raging Storm leaves the battlefield before attackers are declared, creatures named Lightning Rager can attack you or planeswalkers you control.

The tokens aren’t named Elemental. They are named only Lightning Rager. The rule that says a token’s name is its creature types applies only if the tokens aren’t given a name by the effect that creates them.