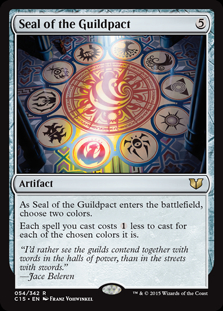 As Seal of the Guildpact enters the battlefield, choose two colors.

Each spell you cast costs {1} less to cast for each of the chosen colors it is.

You must choose two different colors.

Seal of the Guildpact’s last ability doesn’t change the mana cost or converted mana cost of any spell. It changes only the total cost you pay.

Seal of the Guildpact’s last ability can’t reduce the amount of colored mana you pay for a spell. It reduces only the generic component of that cost.

If there are additional costs to cast a spell, or if the cost to cast a spell is increased by an effect (such as the one created by Thalia, Guardian of Thraben’s ability), apply those increases before applying cost reductions.

The cost reduction can apply to alternative costs such as evoke costs.

If a spell you cast has {X} in its mana cost, you choose the value of X before calculating the spell’s total cost. For example, if that spell’s mana cost is {X}{R}{G} and you’ve chosen red and green, you could choose 5 as the value of X and pay {3}{R}{G} to cast the spell. 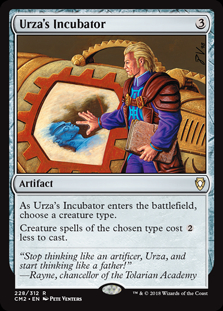 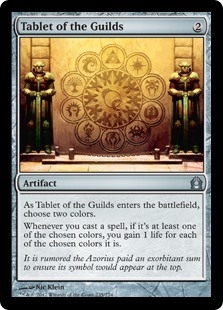