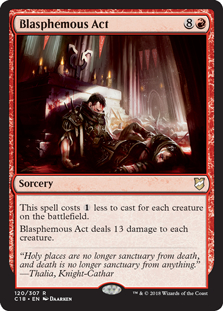 This spell costs {1} less to cast for each creature on the battlefield.

Although players may respond to Blasphemous Act once it’s been cast, once it’s announced, they can’t respond before the cost is calculated and paid.