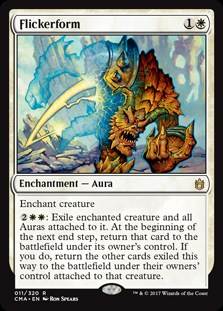 If the enchanted creature was enchanted by any Auras with bestow or any Licids, those cards will return to the battlefield unattached as creatures.

The card that was enchanted comes back onto the battlefield first, regardless of whether it’s still a creature. Then any Auras exiled that can legally enchant that card come back. Any Auras that can’t enchant that permanent remain exiled.

If the enchanted creature was a token, it ceased to exist when it was exiled. Any Auras that were attached to it (including Flickerform) remain exiled.