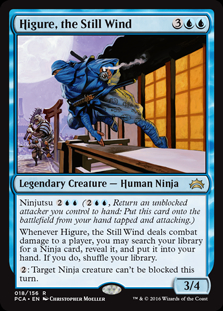 Ninjutsu {2}{U}{U} ({2}{U}{U}, Return an unblocked attacker you control to hand: Put this card onto the battlefield from your hand tapped and attacking.)

Whenever Higure, the Still Wind deals combat damage to a player, you may search your library for a Ninja card, reveal it, and put it into your hand. If you do, shuffle your library.

If Higure deals regular combat damage and you use its ability to search for another Ninja, that card won’t be in your hand in time to activate its ninjutsu ability to put it onto the battlefield and deal damage. However, the card you searched for could still be swapped for an unblocked creature, including Higure, as long as you activate its ninjutsu ability before the end of combat.

If Higure deals first strike damage (or the first part of double strike damage), the triggered ability would resolve before regular combat damage, and the searched-for Ninja would be able to get swapped with an unblocked creature and still deal its regular damage.