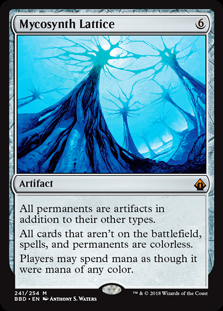 All permanents are artifacts in addition to their other types.

All cards that aren't on the battlefield, spells, and permanents are colorless.

Players may spend mana as though it were mana of any color.

The Lattice’s first ability causes Auras to become artifacts. Combined with March of the Machines from the Mirrodin set, this can then make those Auras become creatures. An Aura that’s also a creature can’t enchant anything. It’s unattached the next time state-based actions are checked, and then immediately put into its owner’s graveyard as a second state-based action.

Mycosynth Lattice turns all permanents on the battlefield into artifacts. Spells on the stack and cards in other zones aren’t permanents, so those spells and cards don’t become artifacts.

Mycosynth Lattice’s second ability makes everything, in every zone of the game, colorless.

The Lattice’s third ability lets players spend even colorless mana as though it had a color. However, it doesn’t remove restrictions on the mana. For example, Mycosynth Lattice doesn’t allow mana from Vedalken Engineer to be used to cast a nonartifact spell.