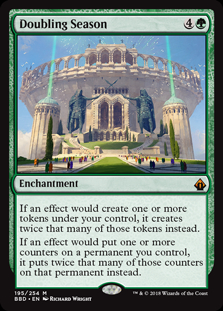 If an effect would create one or more tokens under your control, it creates twice that many of those tokens instead.

Planeswalkers will enter the battlefield with double the normal amount of loyalty counters. However, if you activate an ability whose cost has you put loyalty counters on a planeswalker, the number you put on isn’t doubled. This is because those counters are put on as a cost, not as an effect.