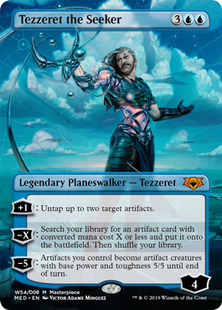 −X: Search your library for an artifact card with converted mana cost X or less and put it onto the battlefield. Then shuffle your library.

[−5]: Artifacts you control become artifact creatures with base power and toughness 5/5 until end of turn.

A noncreature permanent that turns into a creature is subject to the “summoning sickness” rule: It can only attack, and its {T} abilities can only be activated, if its controller has continuously controlled that permanent since the beginning of their most recent turn.

The first ability can target zero, one, or two artifacts. You may activate it with no targets just to put a loyalty counter on Tezzeret.

The third ability affects all artifacts you control, including artifacts that are already creatures.

The third ability causes artifacts you control to become creatures in addition to their other card types.