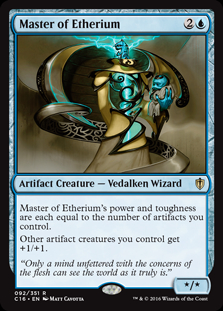 Master of Etherium's power and toughness are each equal to the number of artifacts you control.

Other artifact creatures you control get +1/+1.

The first ability works in all zones.

Since Master of Etherium is an artifact itself, while it’s on the battlefield you will usually control at least one artifact.