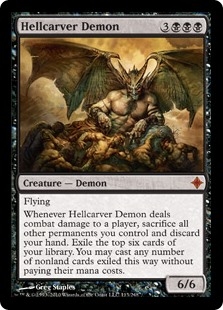 Whenever Hellcarver Demon deals combat damage to a player, sacrifice all other permanents you control and discard your hand. Exile the top six cards of your library. You may cast any number of spells from among cards exiled this way without paying their mana costs.

The triggered ability is mandatory. All the permanents you control, including all lands, will be sacrificed.

The cards from your library are exiled face up.

You cast nonland cards from exile as part of the resolution of Hellcarver Demon’s ability. You may cast those cards in any order. Timing restrictions based on the card’s type (such as creature or sorcery) are ignored. Other restrictions are not (such as “Cast [this card] only before the combat damage step”). You cast all of the cards you like, putting them onto the stack, then Hellcarver Demon’s ability finishes resolving. The spells you cast this way will then resolve as normal, one at a time, in the opposite order that they were put on the stack.

Any cards you can’t cast (because they’re lands or they have no legal targets, perhaps) or choose not to cast simply remain exiled.

If you control two Hellcarver Demons that deal combat damage to a player at the same time, each Demon’s ability triggers. When the first one resolves, you’ll sacrifice all permanents except that Hellcarver Demon (meaning you’ll sacrifice the other one). Then you’ll exile six cards from your library and may cast nonland cards exiled that way. After those spells resolve, the other Demon’s ability resolves. You’ll sacrifice all permanents you now control (including the first Demon and any permanents put on the battlefield as a result of the spells you just cast), exile six more cards from your library, and cast any number of them. 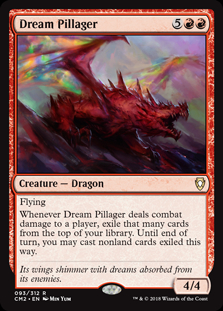 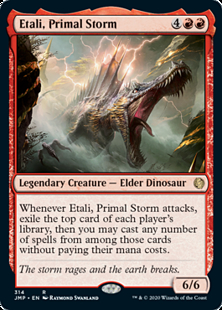 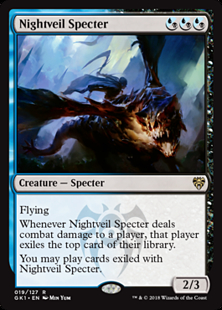