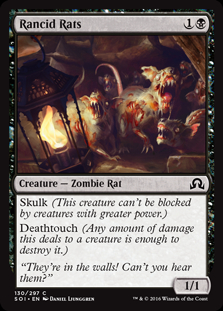 Skulk (This creature can't be blocked by creatures with greater power.)

Deathtouch (Any amount of damage this deals to a creature is enough to destroy it.)

If you cause a creature to have 0 power or less, use the actual value (which may be negative) to determine whether it can block or be blocked. A creature with skulk and 0 or less power most likely won’t be blocked, but it won’t deal combat damage and won’t trigger any abilities that trigger when combat damage is dealt.