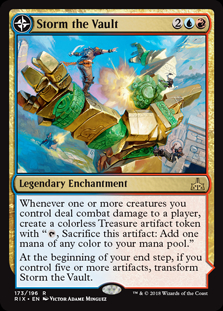 Whenever one or more creatures you control deal combat damage to a player, create a Treasure token. (It's an artifact with "{T}, Sacrifice this artifact: Add one mana of any color.")

At the beginning of your end step, if you control five or more artifacts, transform Storm the Vault.

In a Two-Headed Giant game, if you control more than one creature that can attack, you attack different opponents so that Storm the Vault’s first ability triggers twice.