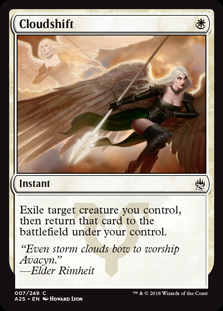 Exile target creature you control, then return that card to the battlefield under your control.

The returned card won’t be the target of any spells or abilities that targeted it before. Any spells that don’t target, such as Akroma’s Vengeance, will still affect it.

If a token is exiled this way, it will cease to exist and won’t return to the battlefield.

When an effect returns the exiled card “under your control,” you control it indefinitely after that. In a multiplayer game, if a player leaves the game, all cards that player owns leave as well. If you leave the game, any creatures you control from Cloudshift’s effect are exiled.