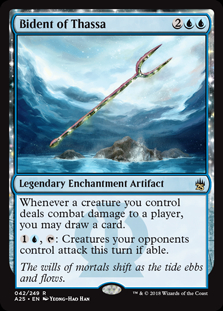 Whenever a creature you control deals combat damage to a player, you may draw a card.

{1}{U}, {T}: Creatures your opponents control attack this turn if able.

The controller of each attacking creature still chooses which player or planeswalker that creature attacks.

If a creature can’t attack for any reason (such as being tapped or having come under that player’s control that turn), then it doesn’t attack. If there’s a cost associated with having a creature attack, the player isn’t forced to pay that cost, so it doesn’t have to attack in that case either.