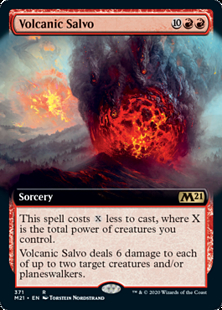 This spell costs {X} less to cast, where X is the total power of creatures you control.

Volcanic Salvo deals 6 damage to each of up to two target creatures and/or planeswalkers.

To determine the total cost of a spell, start with the mana cost or alternative cost you’re paying, add any cost increases, then apply any cost reductions (such as that of Volcanic Salvo). The converted mana cost of the spell remains unchanged, no matter what the total cost to cast it was.

The cost reduction applies only to generic mana in the cost of Volcanic Salvo. It can’t reduce the {R}{R} requirement.

Once you begin to cast Volcanic Salvo, players can’t take other actions until you’ve finished casting it. Notably, they can’t try to change the total power of your creatures.

You can’t target the same creature or planeswalker twice with Volcanic Salvo to deal 12 damage to it. 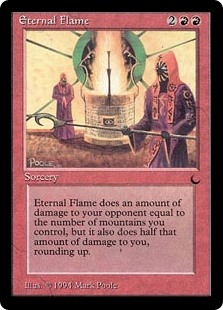 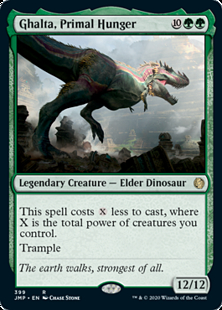 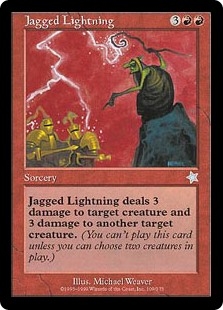