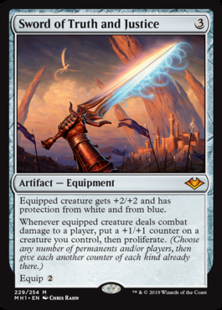 Equipped creature gets +2/+2 and has protection from white and from blue.

Whenever equipped creature deals combat damage to a player, put a +1/+1 counter on a creature you control, then proliferate. (Choose any number of permanents and/or players, then give each another counter of each kind already there.)

The Modern Horizons set doesn’t include any ways for players to have counters to proliferate, but some cards in other sets say that a player “gets” a counter of a certain kind. Notably, emblems aren’t counters.

You can choose any permanent that has a counter, including ones controlled by opponents. You can’t choose cards in any zone other than the battlefield, even if they have counters on them (such as suspended cards).

You choose a creature, put a +1/+1 counter on it, then proliferate all while the triggered ability is resolving. Nothing can happen between these things, and no player may choose to take actions.