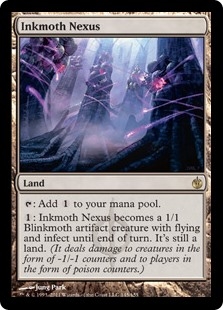 {1}: Inkmoth Nexus becomes a 1/1 Blinkmoth artifact creature with flying and infect until end of turn. It's still a land. (It deals damage to creatures in the form of -1/-1 counters and to players in the form of poison counters.)

If you’ve controlled Inkmoth Nexus continuously since your most recent turn began and it becomes a creature, it can attack or be tapped for mana.