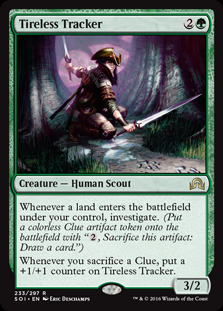 Whenever a land enters the battlefield under your control, investigate. (Create a colorless Clue artifact token with "{2}, Sacrifice this artifact: Draw a card.")

Whenever you sacrifice a Clue, put a +1/+1 counter on Tireless Tracker.

The token is named Clue and has the artifact subtype Clue. Clue isn’t a creature type.

The tokens are normal artifacts. For example, they can be sacrificed to cast Angelic Purge or targeted by Root Out.

If you sacrifice a Clue for another card’s cost or effect, such as that of Angelic Purge or Tamiyo’s Journal, you can’t also pay {2} and sacrifice it to draw a card.