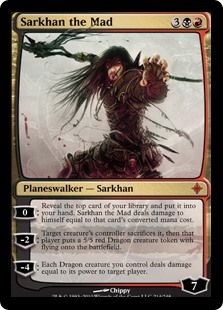 [0]: Reveal the top card of your library and put it into your hand. Sarkhan the Mad deals damage to himself equal to that card's mana value.

[−2]: Target creature's controller sacrifices it, then that player creates a 5/5 red Dragon creature token with flying.

[−4]: Each Dragon creature you control deals damage equal to its power to target player or planeswalker.

Unlike previous planeswalkers, Sarkhan the Mad has no way to raise his loyalty.

Once the first ability starts to resolve and you reveal the top card of your library (and see how much damage Sarkhan the Mad deals to himself), it’s too late to respond.

The first ability causes Sarkhan to deal damage directly to himself, resulting in that many loyalty counters being removed from him. The damage would never have been dealt to you, so prevention effects that would prevent damage from being dealt to you won’t affect it.

If the targeted creature is an illegal target by the time the second ability resolves, the ability doesn’t resolve. The player won’t get a Dragon token.

If the targeted creature is a legal target by the time the second ability resolves but its controller can’t sacrifice it (due to Tajuru Preserver, perhaps), the ability continues to resolve. That player gets a Dragon token.

You choose a single target as you activate the third ability. All your Dragons deal damage to that player.

If you target an opponent with the third ability, you choose separately for each Dragon creature you control whether or not to redirect the damage dealt by that Dragon to a planeswalker that player controls. 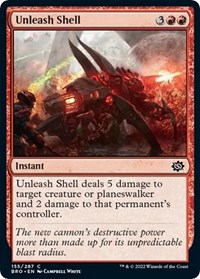 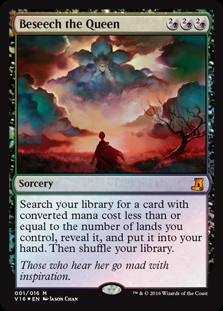