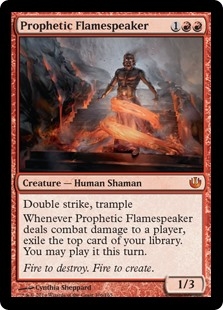 Whenever Prophetic Flamespeaker deals combat damage to a player, exile the top card of your library. You may play it this turn.

If Prophetic Flamespeaker deals combat damage to a player multiple times in a turn (if it wasn’t blocked, for example), its triggered ability will trigger each time.

The card is exiled face up. Playing it follows the normal rules for playing that card. You must pay its costs, and you must follow all applicable timing rules. For example, if it’s a creature card, you can cast it only during your main phase while the stack is empty.