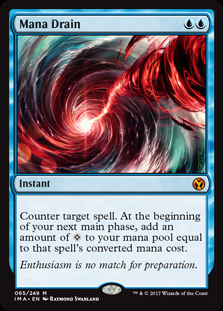 Counter target spell. At the beginning of your next main phase, add an amount of {C} equal to that spell's converted mana cost.

Mana Drain can target a spell that can’t be countered. When Mana Drain resolves, that spell won’t be countered, but you’ll still add mana to your mana pool at the beginning of your next main phase.

If the target spell is an illegal target when Mana Drain tries to resolve, it won’t resolve and none of its effects will happen. You won’t get any mana.