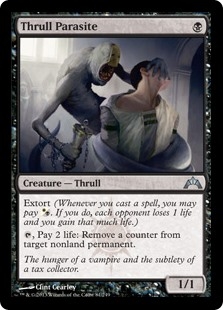 Extort (Whenever you cast a spell, you may pay {W/B}. If you do, each opponent loses 1 life and you gain that much life.)

You may pay {W/B} a maximum of one time for each extort triggered ability. You decide whether to pay when the ability resolves.

The amount of life you gain from extort is based on the total amount of life lost, not necessarily the number of opponents you have. For example, if your opponent’s life total can’t change (perhaps because that player controls Platinum Emperion), you won’t gain any life.

The nonland permanent you choose as the target doesn’t have to have any counters on it. If it has more than one kind of counter, you’ll choose one of those counters when the ability resolves.

You can’t activate Thrull Parasite’s last ability to stop a player from paying the cost of a spell or an ability that requires removing a counter from a permanent (such as a planeswalker’s loyalty ability). 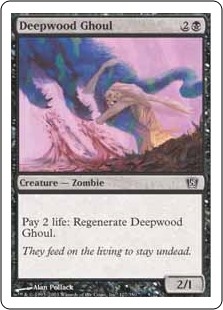 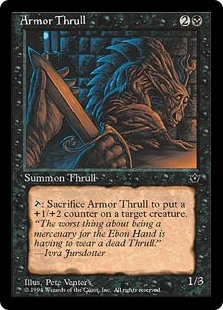 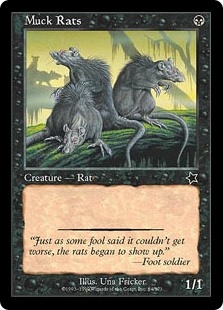